The Last Full Moon…
Last month we saw the Full Moon rise over the Island of Herm as we walked up the hill towards the windmill above the house. It was one of those moments when you know that the sight you have just witnessed will never be forgotten. As we got to the top the hill, the wind blew with an immense force, filling our lungs with the cold night air. Laurie was bundled up in her perambulator enjoying the elements of the night. The low lying, silver-lined clouds darted North almost below us. The huge cream coloured disc of the moon half revealed itself behind the ocean and silhouetted the whole of the Island of Herm which lay sleepily in the bay below us…   With Yuletide upon us and as Christmas Day fast approaches here, on the Island and our students are busy finishing their projects and getting ready to do their first Pop-up shop for the Christmas Market in St. Peter Port, we are steadily fulfilling our orders from the Old Picture House on Abbeydale Road, Sheffield. If you haven’t got your Lunar Wheel 2018 or Lunar Wave 2018 yet then now is the time. Don’t forget they make unique and interesting gifts for anyone interested in the Moon, the Natural World, Gardening, Fishing, Science or just the passing of time. They’re available with our antique oak hangers too, making them truly special and can be used year after year and a bargain at £29 including print. As a friend of Bird&Bee receiving this news letter, you also get an extra 10% off with code FOBB10. 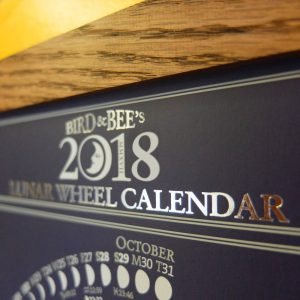 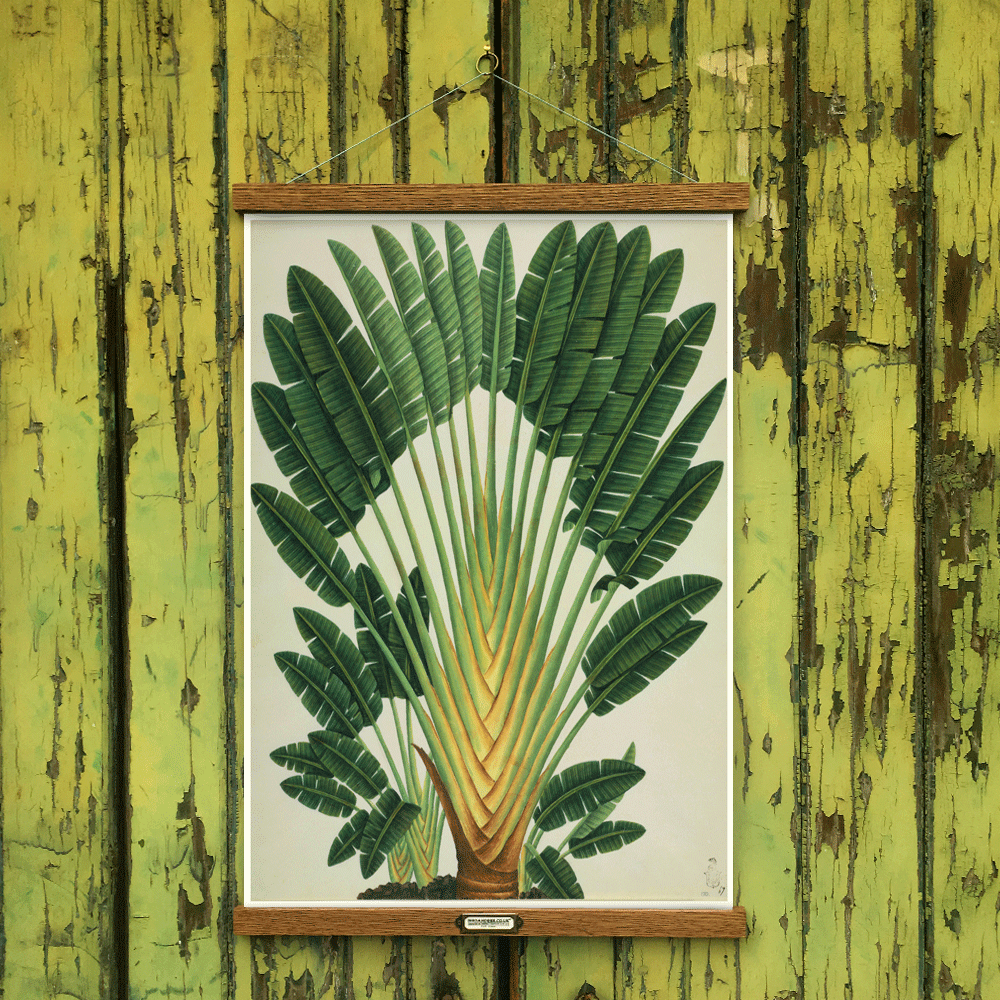 What a Super Moon we have coming up…
*This Sunday brings not only a Full Moon but a Super Moon that passes a mere 221,000 miles away.
A Super Moon occurs when a Full Moon coincides with the Moon’s closest approach to Earth. This is called perigee. It can be a Full Moon or a New Moon and is around 14% bigger than a Micro Moon and 30% brighter. The next Super Moon is this Sunday at around 15:36, so get out this Sunday late afternoon and go somewhere high and watch the spectacle appear above the horizon in the South. If clear it will be a bright night! The best time to enjoy a Super Full Moon is at moonrise when the Moon is just above the horizon, weather permitting. At this position, a Super Full Moon will look bigger and brighter than when it’s higher up in the sky because you can compare the apparent size of the Moon with local elements in the landscape such as hills buildings. This is called the Moon Illusion.

The term for a Super Moon is perigee-syzygy of the Earth-Moon-Sun system. In astronomy, the term syzygy refers to the in-line configuration of these three celestial bodies. When the Moon is close to the lunar nodes of its path during syzygy, it causes a total solar eclipse or a total lunar eclipse.  Winter Super Moons in the Northern Hemisphere look larger than Summer Super Moons. At this time of the year, Earth is closer to the Sun. Because of this, the Sun’s gravity pulls the Moon closer to Earth, making any Winter Super Full Moons look bigger than Summer Super Full Moons.

The ebb and flow of the tide…
Now we are living by the sea, I am just starting to getting to grips with what the ebb and flow of the tide actually means to us locally as we watch the shifting tides over the month. During these Moon phases, the gravitational forces of the Moon and the Sun combine to pull the ocean’s water in the same direction. These tides are known as spring tides or king tides. Super Moons give around 2 inches larger variation than regular spring tides. The tidal range is smallest during the 2 Quarter Moons, known as neap tide. From one high tide to another it takes 12hrs 25mins or 2 full cycles in 24hrs 50 minutes. This means the high tide, time shifts an hour or so everyday. The 25 minutes extra for each tidal cycle is the Earth catching up with the relative daily movement of the Moon in the sky. Amazingly, the Earths, one-ocean mass bulges towards the Moon, twice a day – exactly within the time it takes for the Earth to spin once on it’s own axis and catch up with the Moon – 24hours and 50 minutes…

Here in the Channel Islands, when there is a full moon, the distance between high and low tide can be as much as 9 metres, then receding to 3.5 metres, 7 days later at the quarter moon. To illustrate this on a graph we would see two peaks and two troughs per day, getting further apart in height as they get closer to the full and new moon. 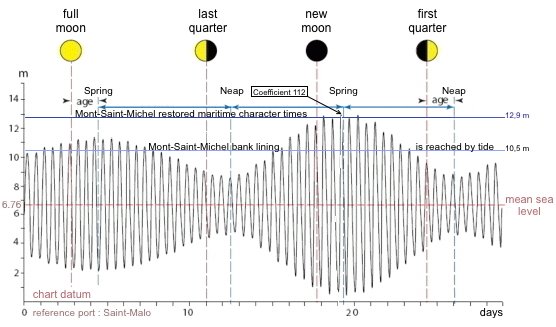 So if we were to live month-to-month by the sun-moon-earth system (syzygy), using a Lunar Month instead of a Gregorian Month then we would have a natural affinity with the tide/time system.  After all, ‘tide’ does mean ‘period of time’ in Old Norse [tíð]. Inertia also plays a part in the tides as a large body of water such as the ocean is already in movement whilst the Earth spins own its axis. As my understanding grows I will write more about the tides in my Full Moon newsletter next year.

This site uses Akismet to reduce spam. Learn how your comment data is processed.