Established in the last Millennium (1999) before the internet and mobile phones took over the planet – Bird&Bee began a multidisciplinary graphic and visual arts studio. Inspiration comes from natural forms, science, people, the universe, current affairs, the arcane, the big questions and the little things…

We produce our own limited edition, printed artefacts for sale, including Bird&Bee’s Original Lunar Wheel Moon Calendar & Bird&Bee’s Oak Picture Hangers.  We make our beautiful Oak hangers (available in sizes from 8-48″). We write essays and copy, illustrate and produce collectable pamphlets on all manner of subjects from botanical illustration, Art & Art History, Time Travel and even How to survive a Zombie Apocalypse!

If you would like to commission Bird&Bee for any of these services or have a chat then please get in touch via the contact page and we can arrange to meet or discuss at more length about your requirements. You can also request a quotation and join us on Facebook, Twitter or Instagram. Read the acclaim people have written and said about us below.

Hidden knowledge
Bird&Bee endeavours to use knowledge from nature, folklore, personal experience and our ancestral predecessors, and turn this knowledge into beautiful design, illustration, infographics and artistic endeavours that are both aesthetic, educational and useful, whilst treading as lightly on Earth as we can.
Environmentalism
To us, there is no point in producing anything that isn’t both useful and sustainable. We print on paper that has been produced by harnessing the power of the Wind and completely from 100% recycled paper wherever possible. We also reclaim, reuse, recycle and upcycle any materials we can get our hands on, whether they be from skips, the tip, forums such as Gumtree or objects found in the countryside or the cityscape. If you have anything that may be of use – please get in touch!
Sustainability
Cost is a big consideration when deciding on print materials, so is environmental impact. We believe that there is a bigger cost involved to society and to the planet as a whole if we do not make the right choice in what we produce and how we produce it. It is being proven, time after time, that good design is both environmentally aware and thoughtful about production processes.
Cradle to Grave
It is also important to consider the ‘cradle to grave’ cycle of a product or item of print. Creating a second life for an item is one way of ensuring a future for it beyond its original intention. This, however, is not enough; we need to consider what happens to the material resource after it has been tossed away. If we continue to ignore this design problem, we fail as designers. Bird&Bee are dedicated to finding the right solution for both client and environment, which ultimately, are in the same interest.
Origins
The Original Bird&Bee insignia encompasses: the Bird and Air in the North, the Dragonfly and Fire in the East, the Fish and Water in the South and the Hare and Earth in the West – all of which revolve and flow into one another… 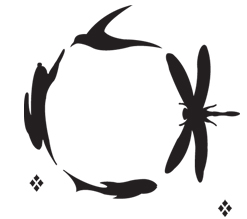 The village of Tetford is situated deep in the heart of the Lincoln Wolds. It is nestled in the centre of a bowl, spanning 5 miles with hills, woodland and open cornfields surrounding it in all directions. As kids it afforded us a lot of freedom as it was quiet and insulated from the outside world – on foot, bicycle and a bus (once a week on a Wednesday) were our only forms of transport. The Greenwich Meridian Line passes directly through the Church Yard of St. Mary’s.
The lanes around Tetford are named accordingly:
North Road, South, Road, East Road, West Road and the hamlet of Little London. These names allude to the Greenwich connection and the points on a compass.

Struck by the Wonder of Nature
Growing up in Lincolnshire, springtime was spent watching nature burst into its abundance, spotting birds, collecting insects, catching rabbits and tickling trout. Summers were spent in the wilds, exploring new corners, climbing trees, following rivers and building dens. Autumn time brought harvest, fiery colours and decay, school fed my other interest – books and print and during Winter snow often trapped us in, leaving us to read by candlelight until the electricity came back on again and the snowdrops started to appear and pheasants’ calls could be heard once more. Without interruption from manmade lighting, the inky blackness of the night sky overhead afforded us of the best view of our Milky Way I have ever seen. The planets of our solar system could be seen clearly with binoculars and meteors crashing into our atmosphere, were plenty. The Slivery Moon was a constant reminder of cycles, change and being a small part of something incomprehensibly large.

Origins of Bird&Bee
After some years travelling through Africa, Asia, Australia and Europe, I settled in Portugal for a couple of years where my dear sister Ana lived. I worked for a Portuguese landscape gardening team (Quinta Sol D’agua), I found myself at the beautiful, Eden-like, country house of the ‘chefe’ one evening, sketching and writing notes outside by the light of the Harvest moon that hung low in the sky, The moon’s reflection was broken by the movement of something on the surface of the fresh water swimming pool that sat in the garden. The idea of the Lunar Wheel struck me. The new millennium was fast approaching and my interest in astronomy and the effects of our universe on Earth was brimming by now. That evening, listening to the world radio whilst working, Lennon & McCartney came flowing through the speaker and Bird&Bee was brought to life…

The king of Marigold was in the kitchen
Cooking breakfast for the queen
The queen was in the parlour
Playing piano for the children of the king.

The king was in the garden
Picking flowers for a friend who came to play
The queen was in the playroom
Painting pictures for the children’s holiday.

The duchess of Kircaldy always smiling
And arriving late for tea
The duke was having problems
With a message at the local bird and bee.

At twelve o’clock a meeting round the table
For a seance in the dark
With voices out of nowhere
Put on specially by the children for a lark.

Lyrical waxing
The name ‘Bird&Bee’ was inspired by the lyrical masters, Lennon & McCartney – in their song ‘Cry Baby Cry’ on the 1968 ‘White Album’. It also refers to the process of creation – as in ‘the birds and the bees’.